“I am old and traditionalist and from a line of lore-keepers. My homeworld is a training ground, and my ancestors’ tombs are treasure-boxes to be looted. I have watched generations of my species split into three ways; killed, enslaved, or killer and enslaver. I live with the knowledge that, out of those three, I am the last.”

He abandoned geniality entirely, and his face froze solid into the coldest thing she’d seen on all of Dromund Kaas. For a moment, there was nothing but ashes in his eyes. Then something shivered, and he had slipped back into the skin and robes of the boastful, grandiose, forever-smiling egotist, daring her to believe he’d ever left.

Vowrawn’s hair had once been almost black, Qet knew from colour paintings he had once seen, but now it had faded to a maroon. A scholar and tactician from the start, his speciality had never been in combat, and while he knew many secrets of the Force, his lightsaber combat on its own was something even some apprentices fresh from Korriban could match. While his mind was singularly talented, his body was simply that of an ageing, somewhat frail Sith, in no state to keep up with warriors one-fifth his age.

Yet here he was, telling his bodyguard to spar with him. Spar properly, with no holds barred, and without his usual array of tricks or, well, bodyguards. Qet would never understand the strange fancies his master took. Last week it had been training a yozusk to react to different colours.

Class: INQUISITOR: CORRUPTION/MADNESS SORCERER
(Uses dark power to maintain allies' health in battle, and protect them from enemy attacks; Increases the Inquisitor's mastery of the Force to drain and corrupt his enemies.)

One of the very last of an ancient Tsis family of the Kissai (priest) subculture. His full name is [possible; reconstructed from relics, documents, et.c.] Tsisajakqo Jenûwtsâkyat, translating to "The way of Sith teaching is hidden[unknown]". 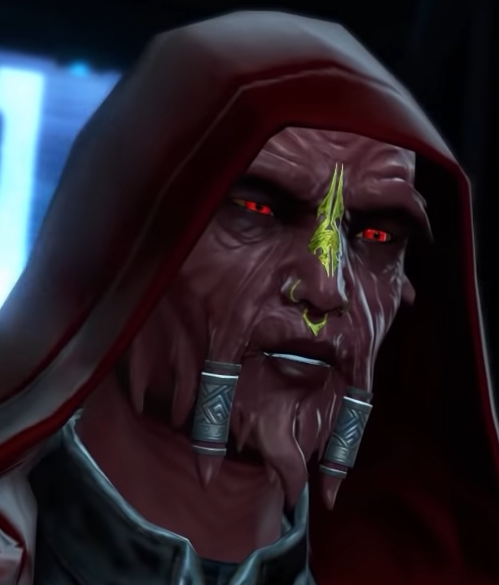 Darth Vowrawn is that rarest of things - an elderly Sith Lord, who has lived to be elderly not by killing all his rivals, but by cultivating careful balance between them as a preventive strategy. The head of the Sphere of Production and Logistics, and Imperial chessmaster, his impatience with the petty, hard-headed and selfish behaviour of most of his peers has brought him to considering drastic reform measures and ideaologies within the Empire. Quietly working to overthrow species bias, he's a lover of his culture of the true Sith people, and resents human Dark Jedi colonisers for hijacking everything that is Sith, and then claiming themselves supreme. While the official slavedriver of the Empire, he's using this position to try and push for, little by little, trickle by trickle, manumission measures that will, perhaps, one day lead to abolition.

Having no biological children, he loves select subordinates as his family, and especially notable is his bond with Qet, his exact opposite and seemingly the perfect example of the Sith Vowrawn detests. While Shaar is intelligent and Atthilike is principled, Qet is something of a brute, but his intense loyalty to Vowrawn is repaid in kind.

Lord Shaar is his favoured successor, and he absolutely dotes on her apprentices as a grandfather would. When Baras arranges her death, Vowrawn is devastated. Baras' attempts on his own life had bothered him little - it was just business, after all - the death of Shaar pushes him down a path that is Dark, even for him... hopefully the reform movements from within his own Sphere can convince him to stick to his plan...